Robotics @ Maryland President and Software Lead Josh Smith watches the Terp team's robot, Qubo, during testing for the 25th RoboSub competition at the Eppley Recreation Center on Friday. Lt. Hannah Lee, one of the Navy Reserve members on hand to help during the event, treads in the pool.
Photos by Stephanie S. Cordle

Despite the distinct smell of chlorine and roped-off lanes at the Eppley Recreation Center, the student teams huddled along the edges of the pool aren’t here for any ordinary swim meet.

Instead, a bundle of wires, propellers and sensors glides under the water, but doesn’t quite make it to the hovering gate in front of it or the other surrounding obstacles. A diver in flippers and a snorkel has to grab it and hook it up to a small crane to surface.

It’s all part of the 25th running of RoboSub, an international competition that challenges student teams to design and build robotic submarines—also known as autonomous underwater vehicles (AUVs)—that can complete a series of tasks while submerged. Robotics @ Maryland, the University of Maryland’s team, is among 39 groups participating through Tuesday. After taking place for several years in San Diego and then shifting online during COVID-19, the annual event is being held for the first time at UMD.

“It’s been very exciting to host,” said Dillon Capalongo ’24, Robotics @ Maryland’s mechanical lead. “Everyone who’s been helping volunteer has been supporting us, saying, ‘Go Terps! This is our school!’”

UMD has placed highly in the competition in the past, including winning it in 2008. This year marks the team’s RoboSub return since the pandemic began, and its robot, Qubo, is taking the plunge.

Qubo, which debuted in the 2017 competition, is smaller, more mobile and more modular than its predecessor, Tortuga IV, Capalongo said. Tweaks over the years have further streamlined the bot, with the team—around 30 Terps from a variety of majors—developing and practicing with it in the Neutral Buoyancy Research Facility, the only such tank in the world on a college campus. 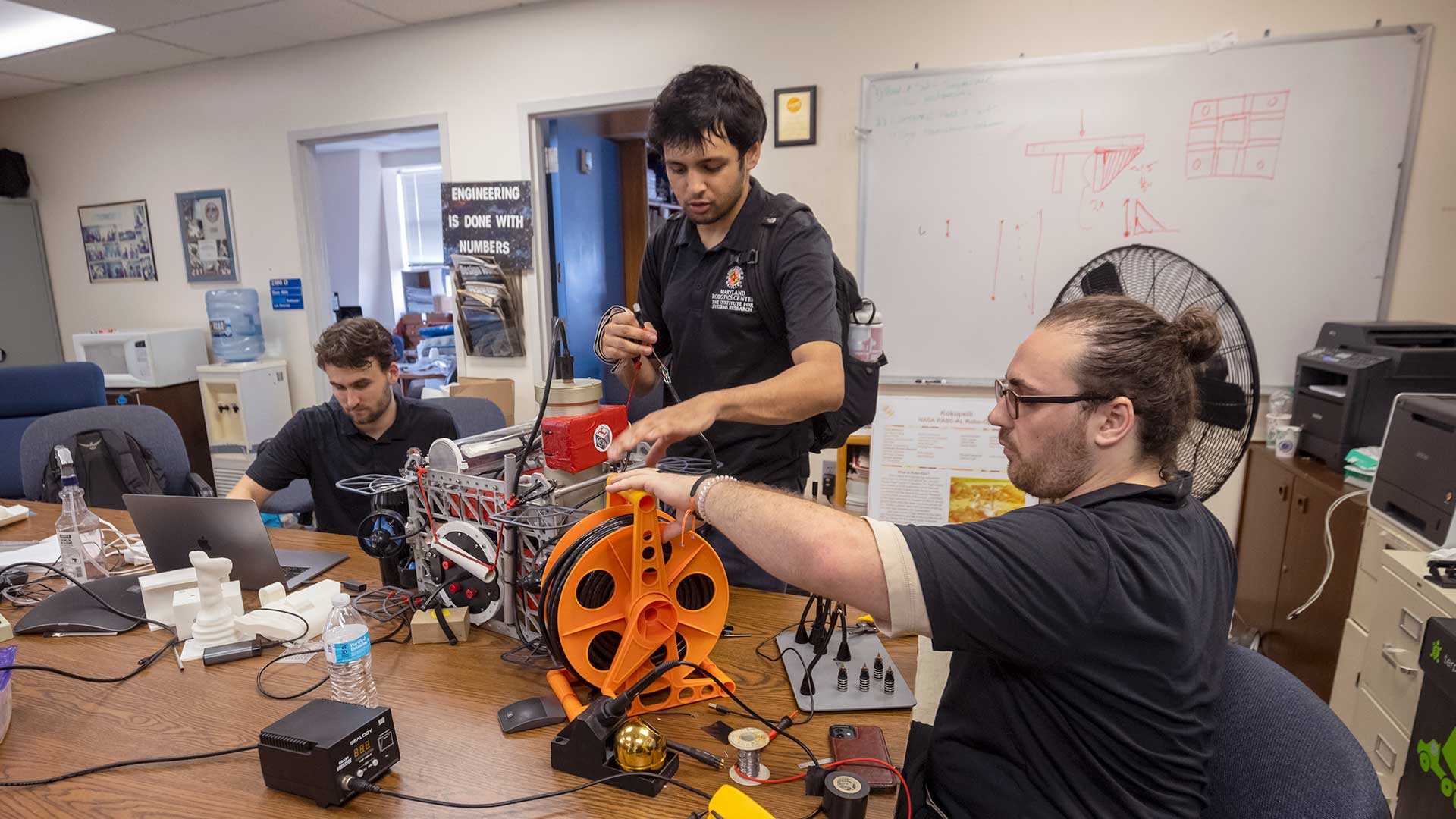 From left, Josh Smith, Mustafa Khan and Rainier Hood re-solder a loose tether connection on their robot, Qubo, in the Neutral Buoyancy Research Facility on Friday before their qualifying round.

The Terps have enjoyed their home-field advantage, Capalongo said. Before delving into the qualifying rounds, which wrap up Saturday, they hopped over to the tank on Friday to re-solder and test a loose tether connection.

To advance to the semifinals, which begin Sunday, AUVs must recognize and pass through a gate in the water. Next, teams must showcase their robots’ skills through a series of tasks, including recognizing images on buoys, dropping markers into bins and firing torpedoes through a target. (This year’s contest is Roaring Twenties-themed, so bootlegger and G-man icons run rampant throughout the underwater course.)

“The main thing is that the moment your robot surfaces, the run is over,” said Rainier Hood, Robotics @ Maryland electrical lead. “You have to make sure you’re not breaching in the middle of your run.” And human creators can’t interfere with the bots once they’re in the water.

Teams—which include powerhouses like Carnegie Mellon University, the University of Alberta and the National University of Singapore—huddled around laptops, carted around equipment and tested their tech at Eppley on Friday. Bringing together budding engineers from around the world in such competitions is “fantastic from the standpoint of engineering education,” said Dave Akin, Robotics @ Maryland team advisor and professor of aerospace engineering. The hands-on experience mimics real-world systems used for underwater exploration, seafloor mapping and more.

“Think of it this way,” he tells students. “When the time comes that you are interviewing for your first job, you’re not going to be stuck saying, ‘Well, I took this course and I took that course.’ You can say, ‘I built a robot and competed with it underwater.’”

Thank you to Annie Krakower for the article. Read the original version of this story on the Maryland Today website.