The Maryland Robotics Center invites you to participate in a day-long symposium highlighting the cutting-edge robotics research of the center. The symposium will feature keynote presentations from experts in the industry and government along with presentations from MRC faculty and students. The Maryland Robotics Center Symposium will be held in-person on May 31st from 8:30 AM to 5 PM in the 1101 A. James Clark Hall Forum and Kim Engineering Building Rotunda. Registration, while free, is required to attend the symposium.

Deliberate navigation in previously unseen environments and detection of novel objects instances are some of the key functionalities of intelligent agents engaged in fetch and delivery tasks. While data-driven deep learning approaches fueled rapid progress in object category recognition and semantic segmentation by exploiting large amounts of labelled data, extending this learning paradigm to robotic setting comes with challenges.

To overcome the need for large amount of labeled data for training object instance detectors we use active self-supervision provided by a robot traversing an environment. The knowledge of ego-motion enables the agent to effectively associate multiple object hypotheses, which serve as training data for learning novel object embeddings from unlabelled data. The object detectors trained in this manner achieve higher mAP compared to off-the-shelf detectors trained on this limited data.

I will describe an approach towards semantic target driven navigation, which entails finding a way through a complex environment to a target object. The proposed approach learns navigation policies on top of representations that capture spatial layout and semantic contextual cues. The choice of this representation exploits models trained on large standard vision datasets, enables better generalization and joint use of simulated environments and real images for effective training of navigation policies.

Jana Kosecka is Professor at the Department of Computer Science, George Mason University. She obtained PhD in Computer Science from University of Pennsylvania. Following her PhD, she was a postdoctoral fellow at the EECS Department at University of California, Berkeley. She is the recipient of David Marr's prize  and received the National Science Foundation CAREER Award. Jana is a chair of IEEE technical Committee of Robot Perception, Associate Editor of IEEE Robotics and Automation Letters and International Journal of Computer Vision, former editor of IEEE Transactions on Pattern Analysis and Machine Intelligence. She held visiting positions at Stanford University, Google and Nokia Research. She  is a co-author of a monograph titled Invitation to 3D vision: From Images to Geometric Models. Her general research interests are in Computer Vision and Robotics. In particular she is interested 'seeing' systems engaged in autonomous tasks, acquisition of static and dynamic models of environments by means of visual sensing and human-computer interaction.

Every day, Amazon is able to quickly pick, pack, and ship millions of items to customers from a network of fulfillment centers all over the globe. This would not be possible without leveraging cutting-edge advances in planning, scheduling and robotics. In this talk, I will provide an overview of some of these techniques, as well as describe some open research problems we are tackling to further push the envelope for robotics and automation in Amazon's network.

Vikas Shivashankar is a Senior Research Scientist at Amazon Robotics. He received his M.S. and PhD. in Computer Science from the University of Maryland, and his B.Tech in Computer Science from IIT Madras. His research is in planning and optimization, with an emphasis on applying these techniques to robotic systems. He has published papers at several top venues including JAIR, AAAI, IJCAI, AAMAS, and won the Outstanding Student Paper award at ICAPS 2014.

The symposium presentations will take place in 1101 A. James Clark Hall Forum. The coffee breaks, poster session, and technology showcase will take place across the street at the Kim Engineering Building lobby. 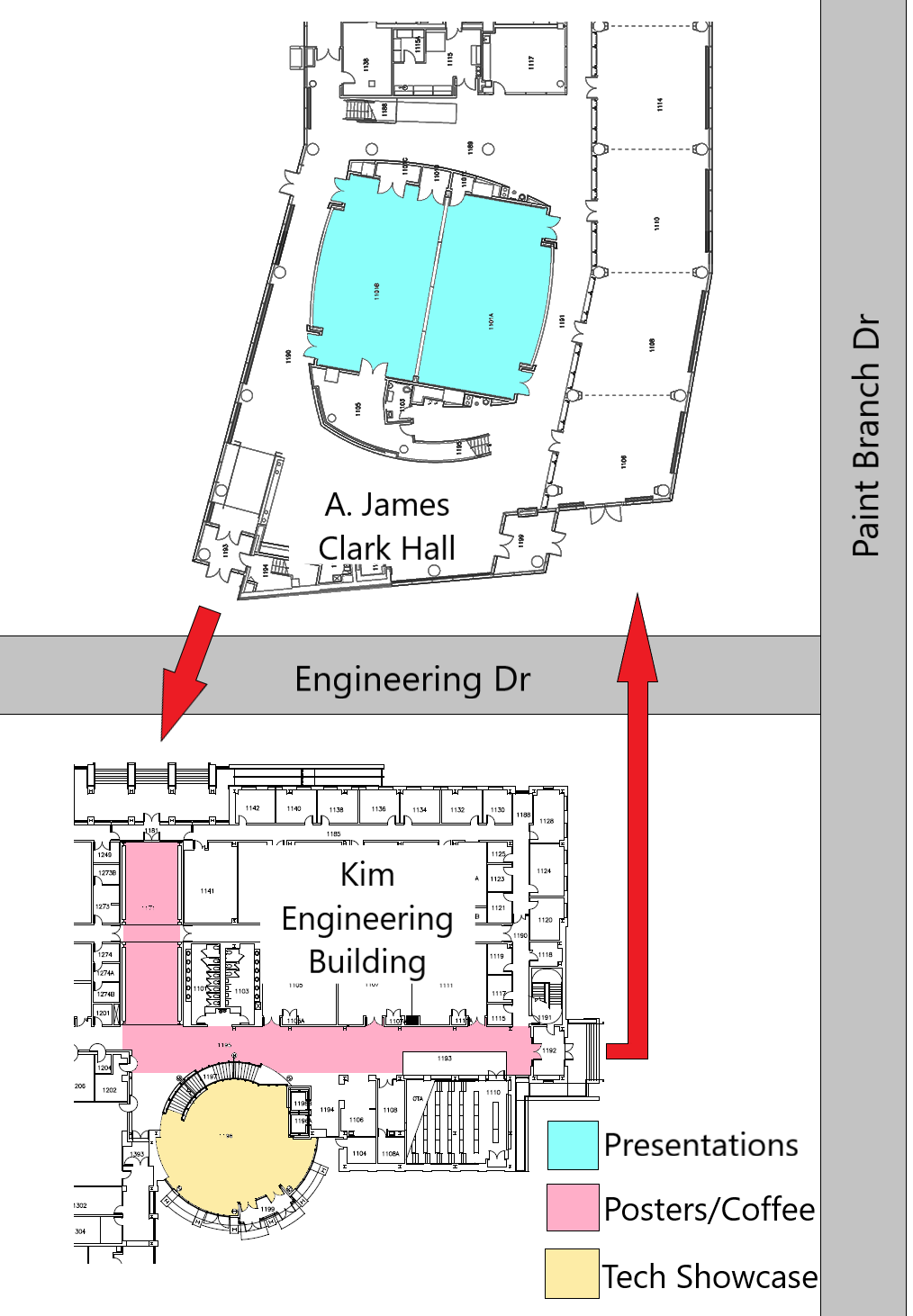 The XFINITY Center Visitor Lot is the closest to the event. For visitor parking information, go to: https://transportation.umd.edu/parking/visitors

Please send all queries to mrcsymposium@umd.edu.